Squeezebox and the Logitech Media Server were ahead of their time, but the hardware was discontinued by Logitech. However a loyal community of enthusiasts continue to evolve the server, and attempt to keep the old hardware alive. Interestingly, in the years that have elapsed since the demise of the Logitech Squeezebox hardware, nobody has come up with a unit that hits the same price/performance point.

Similar functionality can be achieved at higher cost on a proprietary platform using the Sonos Whole House Audio System.. I personally prefer to be able to dig into the media server software and tune it up myself. I like the diversity and the thousand flowers that have bloomed that extend the Logitech Media Server. I expect one day I'll build a box out of a Raspberry Pi and a DAC Hat, and speakers and an amplifier, but catching up to the beautiful design and sound of the Squeezebox Boom will be a big challenge.

The display on one of my Squeezebox Boom players had gone dark. The unit played just fine, and I could control it remotely, as long as it never lost the ability to talk to my home network. If we changed our wifi password, the Boom would be forever lost.

Although Logitech never made any kind of service manual or internal documentation available, there have been intrepid souls who have explored the hardware and have come up with possible repair solutions. The richest collection of repair recipes can be found at Joe's Technology Blog.

As documented in the Squeezebox Forum, my problem was very likely, a bit of blown driver circuitry that could be kludged back to life by wiring in three diodes. The challenge was in opening up the unit and making the mod without damaging anything.

When it came time to separate the front panel from the control board, I misunderstood the instructions, and instead of unplugging the front panel, I tore the whole surface mount connector off the front panel board, taking a few precious traces with it. 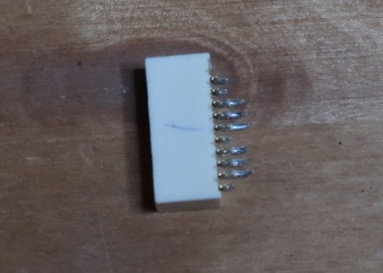 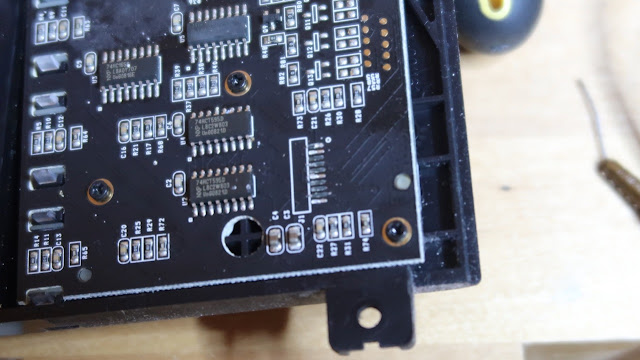 Spare parts for any of the Logitech Squeeze family of hardware are not available from Logitech. The best one can hope for is to find someone who wants to get rid of their Squeezebox. Maybe one can find a "broken, parts-only" posting on Ebay.

I resolved to try and fix what I broke. But first I had to find a finer soldering iron tip than what I usually use, and I had to find some finer diameter solder. 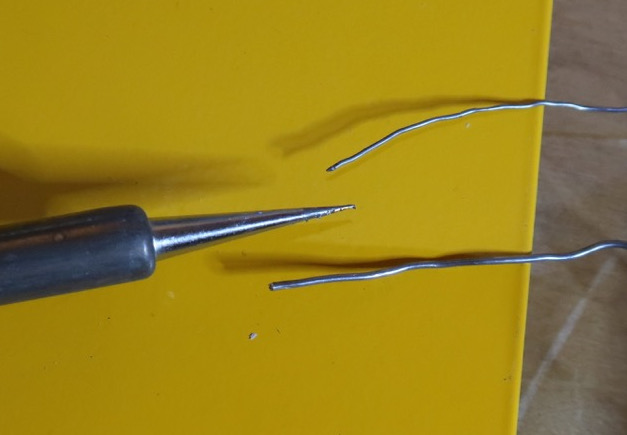 So I glued the connector back onto the control board, making a mess with the super glue that would become a problem later. 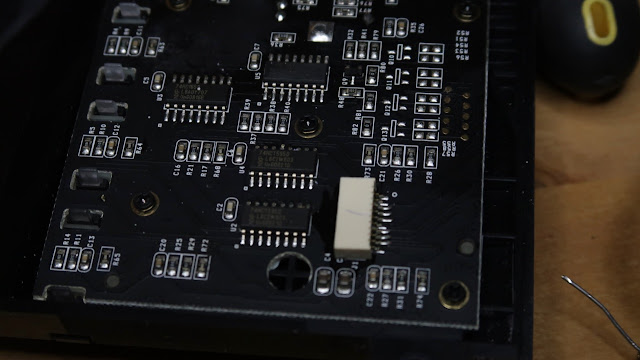 The above photo doesn't show what a mess I made, so I'll circle it for you in yellow: 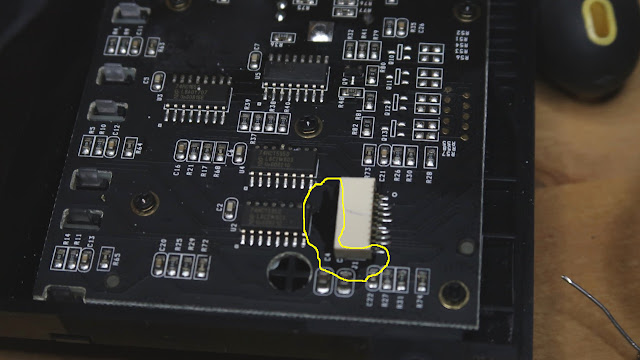 I now realize that I should have been much more careful in applying the super glue, and taken care to avoid the pin slots of the connector. See below for the consequences.

I tack-soldered what I could to what remained of usable traces. This got me 3 out of ten pins. But happily there turned out to be a set of test points that corresponded to the ten connector pins. 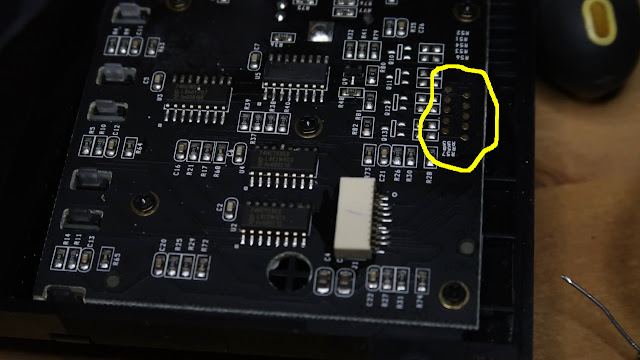 So with patience I did not know I could manifest, I got out my #30 AWG wire wrap wire and attached leads to the remaining pins of the connector. 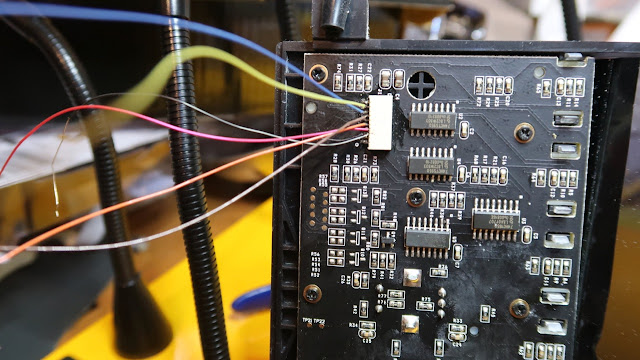 I then began snaking the wires to their positions on the text pads. My wire cutting and stripping technique required refinement. As the photo below shows, when I put my first wire in, I managed to tear out the blue wire on pin 9 of the connector and had to re-attach it. However by the time I got all the wires in place, I had fewer and fewer instances of having to re-re-solder the wire onto the connector.

I expect someone who had ever done this before would have known, as I now know, to lay out, cut and strip the wires before soldering any of them. 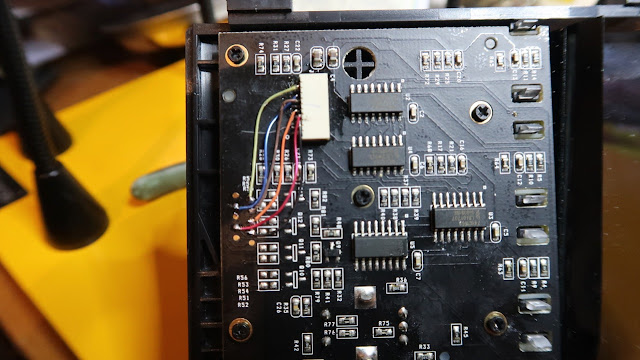 When it came time to re-connect the ribbon cable that joins the front panel to the control board, I discovered that the cable would not go in the connector!
The little piece of blue plastic that helps keep the cable making good contact tore off rather than going in the hole.
The only thing I could figure was that the super glue had gone into the pin slots and prevented them from moving.
With no shim, the ribbon cable seemed too loose. But a sheet of paper seems to have been skinny enough to get in, and fat enough to do some good. 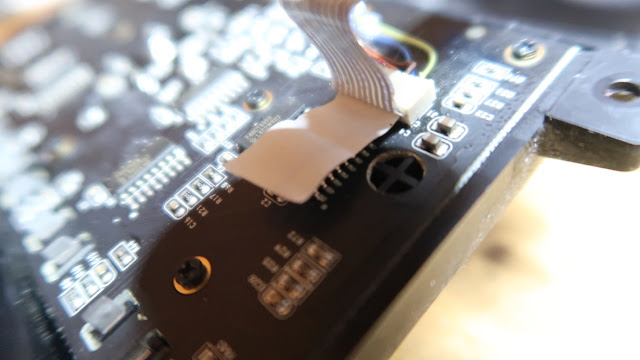 I powered the unit back up and got my blank screen and sound playing.

Thus emboldened, I made the 3 diode repair, and have put the unit back into service!