Reading on the iPad Part 12: Drop Fast Company's app. They have.

I have another blog, Angry Poetnerd for posts where I have only bad things to say. By rights this posting should go to that blog.

With the May 2017 issue, Fast Company stopped doing any extra work to re-render for the iPad app. Instead the regular printed version was loaded verbatim into the app with no post processing, and no additional work on the app to deal with the new requirements.


I Emailed Customer Care and the Letter to the Editor addresses raising my concerns. I never heard back from the Editor, but Customer Care was happy to refund the unused fraction of my subscription so that I could switch to Zinio.

I appreciate that creating an iPad-specific design and rendering is expensive. I'm personally skeptical of its value. But the way Fast Company transitioned out of this model was terrible. The change was un-announced and completely ruined the reading experience for me. I am only continuing as a subscriber because of the availablity of Fast Company via Zinio.  Zinio offers an excellent balance of cost and benefit for reading on the iPad. See also: Reading on the iPad Part 11: Zinio, My New Favorite

I continue to highly recommend that magazine publishers switch to Zinio. For example the IEEE. qmags still hasn't fixed any of the problems I flagged years ago. They have been surpassed by Zinio, but, alas, the IEEE has not yet noticed.

The IEEE Computer Society has quit offering IEEE Computer via qmags. Sadly, they didn't adopt Zinio. There was a self congratulatory note sent out touting the additional formats available instead. For example, Kindle Format. Alas, the Kindle rendering was as bad as the Forbes rendering I reviewed back in 2011 (Reading on the iPad Part 6: Forbes was a disappointment.) I summarize the relevant bit:

The beautiful glossy magazine had been ground down into a cheap paperback book. The pages shrank down to 3x6 inches and the typography was reduced to a single font in only a couple point sizes. Colorful icons and graphical navigational aids were eliminated and everything re-formatted into block paragraphs. But as if to comply with a marketing directive to be able to say, "We offer color!" a very few select photographs were retained as "color plates" scattered throughout.

Forbes sensibly abandoned that format. The IEEE Computer Society has yet to learn what was obvious to some of us in 2011.

Pretty much the only rendering of IEEE Computer I find useful is the PDF format. With a few clicks I can get from the Email announcing the new issue through the iPad web browser into iBooks. If only Apple would copy Zinio's great interface for organizing magazine issues and bookmarks across items.

I feel that the IEEE Computer Society got caught up in offering a list of features, and lost contact with how to provide the best user experience. In my opinion, inadequate outreach was made to their own contacts in the User Experience realm.

Posted by PoetNerd at 6:25 PM No comments:

I have just finished building a PiDP-8/I from a fantastic kit offered by Oscar (Obsolescence Guaranteed) Vermeulen. This is a 2/3 scale reproduction of the front panel of the Digital Equipment Corporation PDP-8/I computer. Inside is a Raspberry Pi using SIMH (See also: SIMH project on GitHub.) to emulate a PDP-8. The PDP-8/I has a special place in my heart as the first computer I really got to know. You always remember your first... 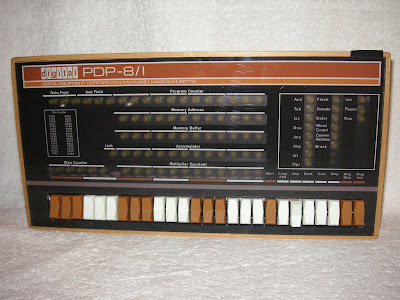 One of the challenges is to bring the various and sundry connections through the bamboo case out to the world in a pleasing manner. I managed this: 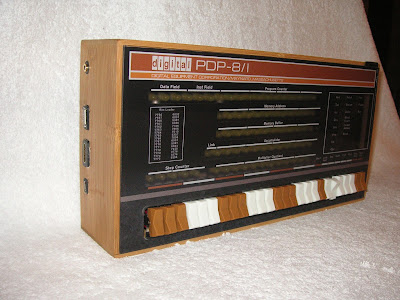 Details on the connectors:

The power, audio, and HDMI extenders were findable with care.

Power was pretty straightforward.  I went with one from Renrii sold through Amazon, but I see it is no longer available, only a month later. Word of advice, look closely at the pictures, "Left Angle" and "Right Angle" are used inconsistently from vendor to vendor.

But once outside the box, if you want to split the 4 pole 1/8" jack into separate RCA connectors, you must buy VERY carefully.  The assignments are not standardized, and some of the splitters have ground where you need signal.  My recommendation:  Buy new/old stock Zune a/v output cable. I got mine from a third party seller on Amazon:  Zune A/V Output Cable (Discontinued by Manufacturer). I confess I've not tested this yet, so I'm not 100% sure this is right.

For HDMI, I tried a cheaper one, but it failed to fit.  So I went with the Vanco 233306X 6" Right Angle Super Flex HDMI High Speed Male to Female Cable with Flat Top from Amazon.

I used standoffs to mount the PiDP-8/I, and then glued a 1/4 inch wood shim to the bottom of the box. This is to improve friction fit, serve as strain relief, and provide a surface to epoxy to.

I did some careful measuring and established a baseline for my connectors that would descend a bit into the wood shim.  Then I drilled a couple holes, and used a rotary tool and wood carver's tools to make the holes mostly shaped like the connectors.  A couple times, I lost control of the rotary tool and scraped up the box.  For example the line above the power connector you see in the final picture below. My holes are less than perfectly shaped.

The USB and hard-wired network connectors of the Raspberry Pie were quite close to the edge. Some people just cut a hole in the box, but I wanted to try and make an extender that would work in a confined space. But there is very little clearance between the Raspberry Pie and the case. 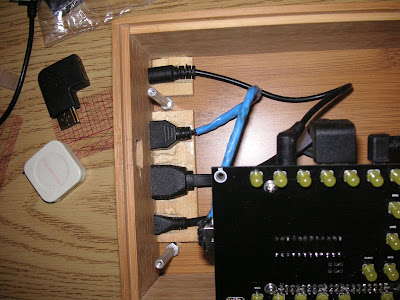 For me this meant cutting up a standard USB connector and hacking up a cable. My first attempt failed as the pins broke off. Here are the steps I took to get to the cut-down connector that did work.
Mouser Electronics was a quite reasonably priced source of male and female USB connectors.